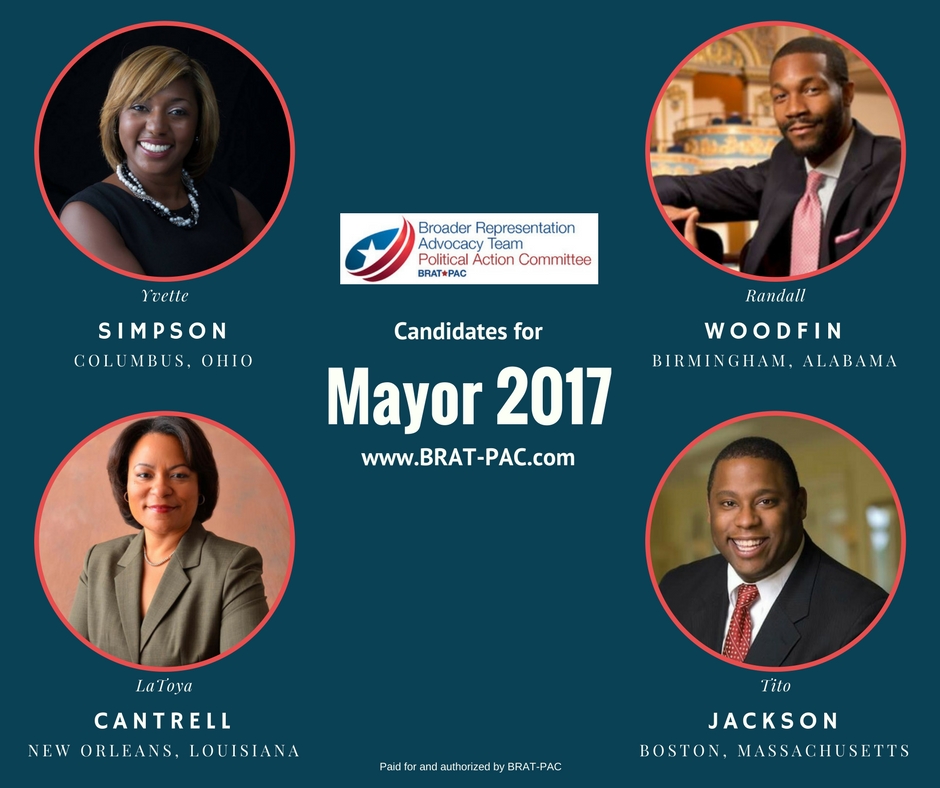 Tito Jackson for Mayor of Boston -  Tito Jackson has served since 2011 as the District 7 Boston City Councilor.  Prior to his election to the Boston City Council, Councilor Jackson spent more than 10 years in the healthcare and technology sectors. Councilor Jackson served as the Industry Director for Information Technology in Governor Deval Patrick’s administration, helping Massachusetts attract and bolster leading-edge technology companies. He served as Governor Patrick’s Political Director, helping the Governor get successfully re-elected in 2010.  Click here to support Tito!

LaToya Cantrell for Mayor of New Orleans - LaToya has committed her life to service, and has served as the President of the Broadmoor Development Corporation, Board Member of the Salvation Army of Greater New Orleans, Arts Council Committee of Greater New Orleans, Neighborhood Partnership Network, 4-H Foundation of Louisiana, Smart Growth Louisiana and the National Association of Bench and Bar Spouses.  Elected to the City Council in 2012, LaToya has developed a reputation as being “for the people.” She has improved people’s lives and collaborated to advance the New Orleans economy.  Click here to support LaToya!

Yvette Simpson for Mayor of Cincinnati - As a young adult, Yvette began holding board positions with community organizations throughout Cincinnati, including the YWCA and the Urban League. She is also a member of the Delta Sigma Theta Sorority, Inc., Cincinnati Alumnae Chapter and the Cincinnati Chapter of the Links, Inc.  Yvette’s role on Cincinnati City Council is an extension of this service. First elected to Council in 2011, she serves as Chair of the Human Services, Youth, and Arts committee, and serves on the Budget & Finance, Law and Public Safety, Neighborhoods and Major Transportation and Regional Cooperation committees. Simpson is also a member of the Hamilton County Regional Planning Commission, as appointed by the City Planning Commission.  Click here to support Yvette! 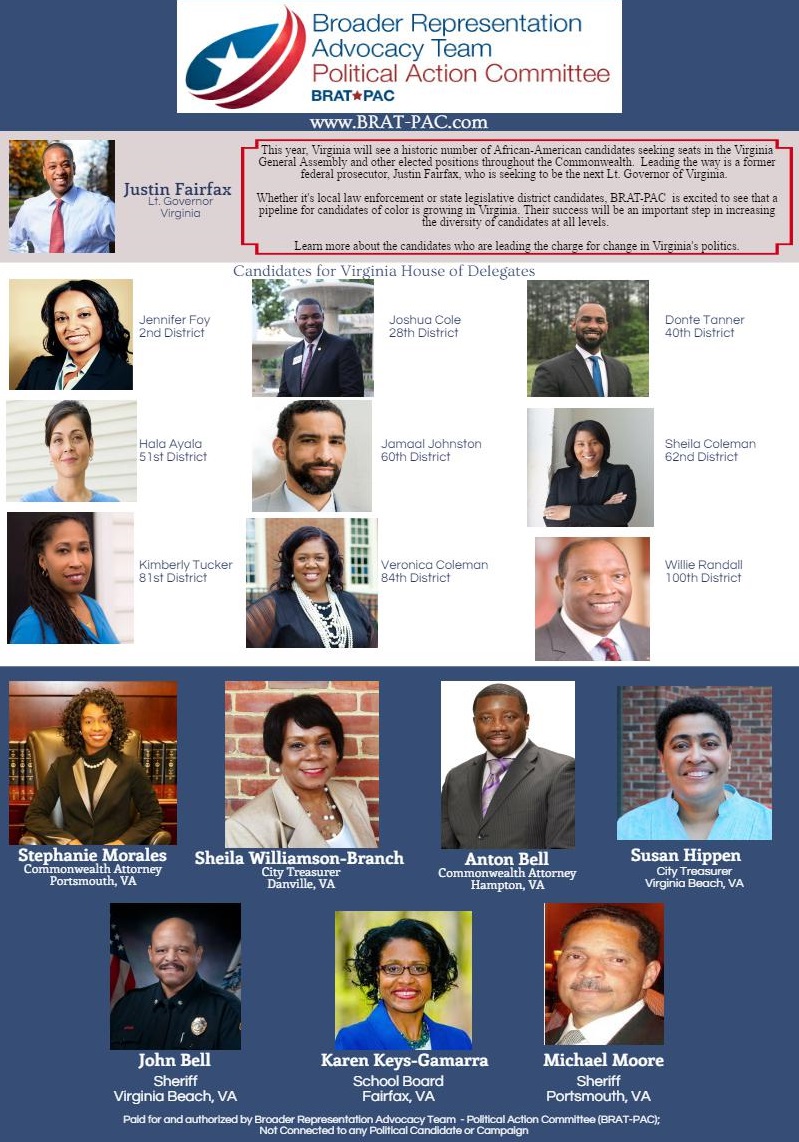 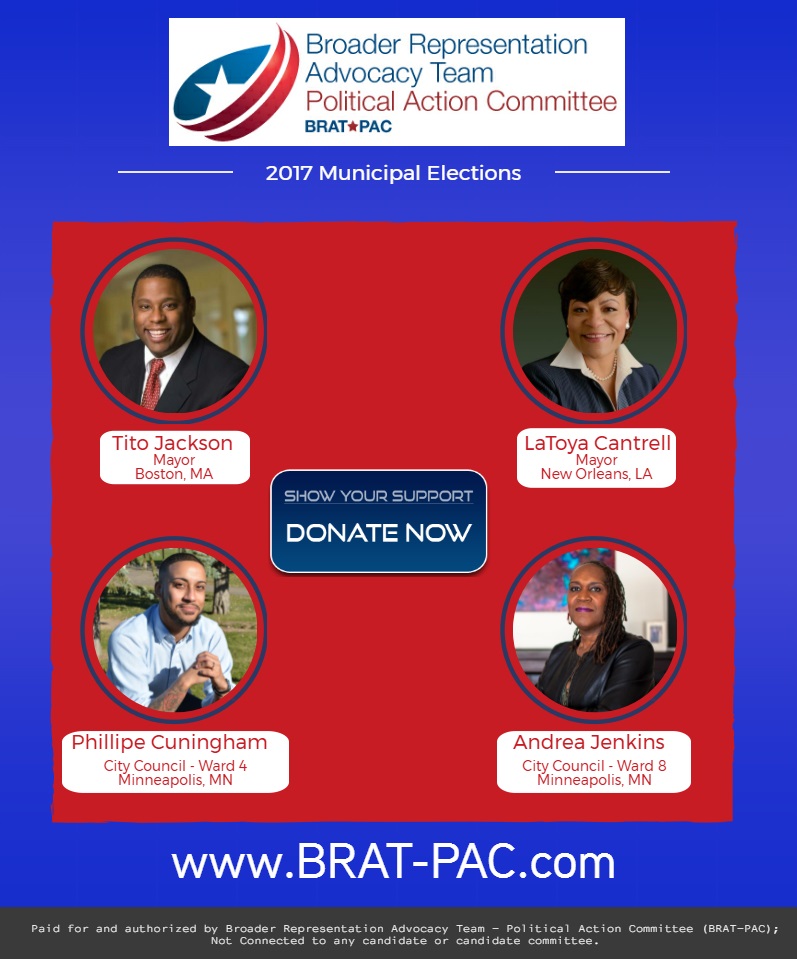 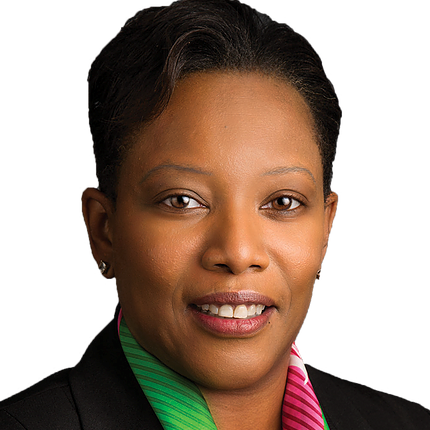 Re-elect Judge Valarie "Val" Hill to Milwaukee Municipal Court (ELECTION DAY: February 21, 2017) - Hill was elected to to the bench in the City of Milwaukee in April 2004 making her the first woman to be elected to the Milwaukee Municipal Court.  Prior to her election, she served as a Milwaukee County Judicial Court Commissioner, where she presided over thousands of misdemeanor, felony, traffic and small claims cases. Previously, Judge Hill served as a Deputy First Assistant, Senior Assistant and Assistant State Public Defender in the Milwaukee Trial Office.  A proud and active member of Alpha Kappa Alpha Sorority, Inc., Judge Hill is active in numerous community based organizations and is a member of the Wisconsin, Milwaukee and National Bar Associations as well as the National Association of Women Judges.